A Screenplay by Scott Lockhart 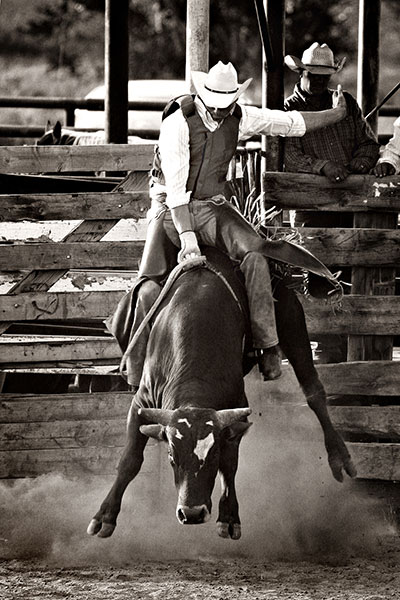 FADE IN: TEXAS PLAINS Black night on the Texas plains. Hear only blowing wind and distant thunder. A thunderstorm gathers.

A vapor light on a utility pole rattles in the wind, casting a pale yellow light on a battered airstream trailer. Beside the trailer is an even older beat up white Chevrolet dueley pick up truck. High Plains Rodeo School, Lubbock, Texas, is visible through layers of dust on its side. Lightning briefly illuminates the scene, dust swirling through an empty corral. Doors on a distant barn slam in the wind. Thunder cracks, horses nicker.

Davis Miller, 42, headed for his last rodeo if he doesn’t sober up soon, watches a small TV, Rangers vs. Yankees. He finds his fresh beer amidst a sea of empties. Thunder cracks, getting closer, takes three steps across his living room, opens the trailer door. At the glimpse of freedom, his Blue Tick Hound, Roy, dives for the opening. An old routine, Davis clamps his legs, blocks the hound’s progress.

Where the hell do you think you’re going? Roy whimpers, sensing something in the night. Davis takes a long draw of his beer. Roy takes advantage of Davis’ lapse in focus, shoots through the door.

Get your butt back in here, dammit!

The wind is kicking up again.

Exactly. A dog’s delight. Roy sniffs the wind, backing away.

A gale blast slams the screen door against the trailer. A tap, tap, tapping from the rooftop. The satellite dish cable is loose. Davis eyes the cable, the coming storm, looks at Roy.

Roy, one of these days you need to get up there and tape that damn thing down.

Lighting strikes in the distance.

Get your butt back in here, dammit!

Another clap of thunder convinces Roy.

Davis and Roy make their way through a litter of beer cans to the only piece of furniture, a battered recliner. Davis settles back in to his chair. A huge gust of wind and the screen goes black. The satellite cable has finally snapped.

Roy, it’s gonna be a long night. I told you we needed to get that satellite cable taped down. Now we’re just going to have to listen to the game on the radio. Roy looks up at Davis. Tail thumping the floor. Davis sets his beer down and rises out of his recliner and walks across the trailer into the kitchen. Standing at the kitchen counter top, covered with fast food wrappers, Davis searches for the radio.

Where is that damn radio?

Moving a box of saltine crackers, Davis finds his old transistor radio and flips it on. The station set on the the radio is delivering a weather broadcast.

Severe thunderstorm warning for the Texas panhandle into eastern and central New Mexico until 3 am Central Standard Time.

Davis looks over at a small photograph of a young girl hanging on the wall. The photograph is of an eight year old girl, Davis’s daughter, Grace Miller. Grace is wearing a Texas Rangers baseball cap. She has long, dark hair pulled back into a ponytail. Davis looks at Roy.

Sounds like a rough night for Gracie up in Santa Fe, too, huh, Roy?

Roy lifts his eyes up towards Davis and falls back to sleep.

All images, writing and digital media appearing on this site are copyright of Scott Lockhart and may not be reproduced without written permission.